of the fight against COVID19

6 million masks, 250 thousand gloves, 100 thousand suits, medical goggles and visors each, as well as 51 ventilators, more than 12 thousand ready-to-eat meals transported to hospitals and welfare centres free of charge, plus 300 pallets for Food Banks - this is a summary of how Raben Group supports the fight against the coronavirus pandemic in Europe.

Raben Group has been undertaking and promoting activities in the field of corporate social responsibility for many years now. Corporate social responsibility is an inherent part of the DNA of the family company based on a system of values. The company approaches the concept of CSR in a comprehensive manner, integrating socially responsible activities with the business strategy of the organization. Also now, in the face of the pandemic, Raben Group could not remain passive in response to the needs of those for whom aid in the current situation is of greatest importance.

Raben Group in Poland, in cooperation with Lions Club Poznań Pillory, organized charitable road transport of medical equipment purchased by the Doctors for Doctors Foundation operating under the auspices of the Supreme Medical Chamber as part of the support campaign for the fight against COVID-19 on the front line. The equipment of the total value of PLN 20 million donated by the Kulczyk Foundation to the Doctors for Doctors Foundation comprised over 57 tonnes of personal protective equipment which, through Raben Group, has been distributed to Medical Chambers and then to hospitals, clinics and doctor's surgeries throughout Poland. As part of this cooperation, the company supplied 1 million surgical masks, 1.5 million FFP2 N95 masks and 100,000 suits, visors and goggles each. The goods were brought from China to Poznań at the end of April on board four LOT Cargo planes. Raben Logistics Polska, in cooperation with soldiers, transloaded the goods, which then went to the Group's distribution centre in Gądki near Poznań, from where they were distributed to Medical Chambers all over the country.

“We really appreciate the professionalism of Raben Logistics; thanks to the company's involvement personal protective equipment was sent to medical chambers all over Poland immediately after it was picked up from Ławica Airport - which was of key importance for the whole organized humanitarian action.” - said Jacek Masiota, President of Lions Club Poznań Pillory.

Raben Group also gets involved in and supports charity actions initiated by its customers and the mass media. An example is Fresh Logistics Polska, a company handling transport and storage of fresh food, which delivered free of charge over 12 thousand ready-to-eat meat and fish dishes donated by its customer - Graal Group - to hospitals in Tczew and Kociewie and various social welfare centres. In turn, Raben Transport, together with its customer, Action, transported 250 thousand gloves and 2.5 thousand safety goggles to 5 hospitals in Poland. It is also worth mentioning the Lithuanian company of Raben Group - Raben Lietuva, which is involved in the project “Laikykitės, medikai” [Doctors, hang on!] organized by Laisvės TV, an independent Internet television. The aim of the initiative was to provide protective equipment for doctors and medical staff. The company collected personal protective equipment and disinfectants from suppliers, which it delivered free of charge to over 50 facilities in Lithuania.

“The current market situation is undoubtedly quite a challenge, but it must not mean inactivity. On the contrary, we must act to ensure that the negative consequences of the current state of affairs are experienced as little as possible. Particularly now, partnership and cooperation between all participants of the supply chain is crucial. We are pleased that together with our business partners we can support people and institutions without whom an effective fight against the pandemic would not be possible.” – comments Klaudyna Polanowska-Skrzypek, the Spokesperson of Raben Group.

When talking about fighting a dangerous, invisible enemy, one cannot forget the country like Italy, where the situation is still dramatic. The Group's Italian company Raben Sittam, located in the European epicentre of the pandemic, has not abandoned its responsible attitude and is actively involved in supporting Italian medical facilities. On April 2, a charter plane landed at Fiumicino Airport in Italy, with the cargo of 51 ventilators and 1.4 million protective masks transported from China. On April 20, another humanitarian charter from Dubai arrived at Napoli Capodichino airport, transporting 2 million masks, 2.5 thousand medical goggles and 2 thousand protective suits. The aforementioned equipment was distributed throughout the country thanks to the involvement of Raben Sittam, not only to hospitals but also to institutions such as the Italian Red Cross, the Italian Post and the uniformed services.

Raben Group has been cooperating with Food Banks for years, helping them to save food from waste. Food banks obtain food free of charge from producers and retailers and then they provide it to people in need. However, they need funds to transport and store food donations. These are often products with short shelf life, which is why the delivery time is so important, so that the food can be delivered as quickly as possible to the people who need it. Thanks to the logistics support from Raben, Food Banks are able to efficiently acquire food which hasn't been sold and which is still before the sell-by date.

“The actions supporting Food Banks are particularly important right now, when in the face of a huge economic crisis, more and more people will benefit from these institutions. The fight against food waste and irresponsible consumption was a challenge for many countries even before the pandemic. However, currently, due to the threat of famine, it is one of the priorities. Only in April this year, Raben Logistics Czech saved over 100 pallets of food from waste, which were delivered to Food Banks in the whole Czech Republic. In turn, Fresh Logistics Polska transported over 50 tonnes of fresh food to banks in Poland in March and April” - explains Jakub Krzewina, CSR Manager, Raben Group.

It is worth noting that Raben Logistics Polska also carries out transports on behalf of Food Banks by delivering food products to people under quarantine. In April alone, 14 Food Banks in Poland will receive almost 70 tonnes of food.

Raben Group has been running the Transport is Necessary campaign for years now as part of its socially responsible activities. Analysing the abovementioned activities of the company, it can be concluded that in such difficult times as the coronavirus pandemic, this campaign has gained even more importance. Transport has been and will always be necessary. 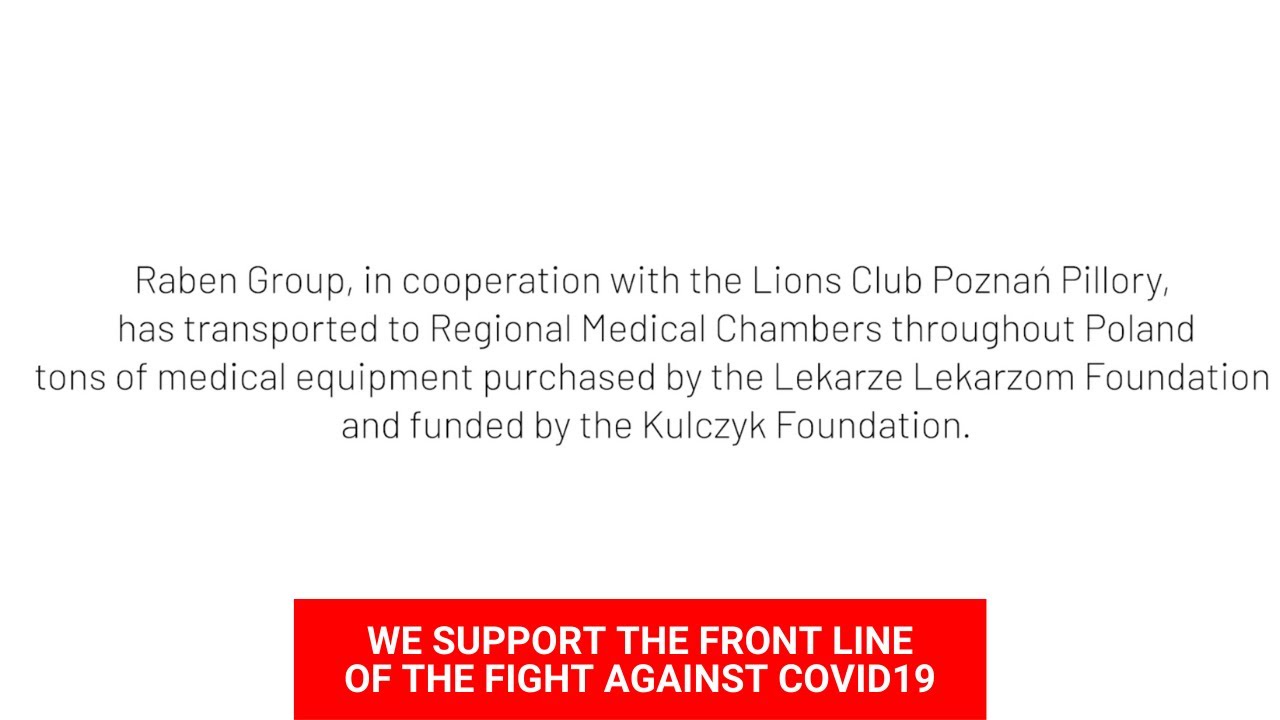