Development of international groupage connections as the driving force of trade

The world slowed down a little because of COVID-19. Many businesses limited their operations and consumers cut back on their needs which translated into fewer purchases. However, already in 2021, just over a dozen months after the pandemic broke out, there was a rebound. Global trade hit a record high and it is projected to continue to grow, although perhaps not as rapidly . In order to do that, a thriving international transport network is necessary and the race of who can transport more and faster will be won by those who have an extensive groupage network in many countries, a sufficiently large fleet, technological support, as well as experience and know-how - like Raben Group, a logistics operator which has operated on the market for over 90 years.

What came first - the goods that should go to a distant consignee or the truck ready to be filled with shipments? Fortunately, this question is not as philosophical as the dilemma about the origin of the egg and the chicken, and the answer is much easier. The offer of logistics companies in the field of international groupage transport is always tailored to the needs of exporters and importers. Factors such as the demand for raw materials, semi-finished and finished goods, the location of factories and warehouses, delivery and pick-up schedules, and finally long-term production and sales plans have a huge impact on the creation of international groupage connections.

International transport entered a new era in May 2004 with the enlargement of the European Union to include Poland and nine other countries. The creation of a common market brought about a revolution-like phenomenon in the logistics industry, associated not only with trade facilitation and changes in demand, but also with Western capital investment in Central Europe. In almost two decades, the world has become a global village: companies have boldly started to cooperate with suppliers even from the other hemisphere, and due to the concentration of production, products from a few factories in the world started to reach over a dozen or several dozen markets. The answer to this way of work organization was to be efficient supply chains, made possible by an extensive groupage network of international connections. As one of the fastest growing European companies in the TFL industry, Raben Group was able to take full advantage of the new opportunities which emerged with the opening of European markets and the free flow of goods.

The concentration of production was accompanied by the consolidation of distribution warehouses, which also strongly determines the emergence of international lines and the way operators work. This phenomenon mainly affects non-food items (consumer electronics, household chemicals, etc.), and to a lesser extent food products, due to traditions, local tastes and brands. Many Western corporations have decided to reduce the number of distribution warehouses in Europe to three or four, which has improved the availability of assortments and reduced overall inventories but has become a challenge for carriers. This is because customers want regular and more frequent deliveries. As a result, needs emerge for efficient deliveries of components, often in quantities which do not allow for organizing a direct delivery, as well as deliveries of finished products to customers scattered throughout Europe and addressing their growing requirements. The distribution distance is sometimes as far as 1,000 km, the customer expects delivery “tomorrow” and the order comprises only a few EUR-pallets. Such  lead times are not possible at a reasonable cost but a well-organized network of international connections - often with overnight departures - makes it possible to complete the order within 24-48 hours.

When planning a regular groupage line, it is also worth taking into account the carrier's internal sources of information, namely the marketing and sales departments. Sales staff talk to customers about their current and future needs resulting from the company strategy. Regular meetings of the customers' caretakers with the decision-makers in the supply chain at the European level also provide important information. In the interest of business development, customers share their strategic plans with logistics operators and increasingly consult future solutions with them. Raben Group treats spot quotation requests as an additional source of knowledge, the analysis of which allows for observing trends and making decisions concerning new connections. Company representatives also attend major conferences, trade shows and symposiums to keep their finger on the pulse.

In the case of Raben Group, the stimulus to launch new international lines is - apart from macroeconomic data, market observations and own internal data - the expansion into new markets. Practically every year another country joins the Raben family - in 2021 and 2022 they were companies in Greece and Austria. When a new country appears on the Raben map, the local distribution network is almost immediately connected with other countries of the Group through direct lines. With such an extensive, already existing Raben network in Europe and technological support, it is enough to agree on the frequency, choose consolidation platforms (gateways), build an interface for on-line exchange of information in real time, set goals for the sales department - and you can operate permanent groupage lines.

At the same time, the company remains active in its existing markets, investing particularly heavily in those with the best prospects. One of them is Germany - Poland's biggest trading partner for years - so it is no wonder that Raben offers over 120 direct connections with this country, thanks to which over 430 thousand groupage shipments were transported last year. Central and Eastern European countries are experiencing high growth rates: in 2021, volume in Czechia increased by 30% compared to the previous year, Romania and Bulgaria are also gaining in importance. Italy is also of interest because of its own potential and the fact that it is a gateway for trade with North Africa and Malta. All these countries are covered by  special project of Raben Group which focuses on the development of international groupage connections, i.e. it aims at the optimal combination of customer expectations, possibilities of operations and diversity of all companies which belong to the logistics operator.

Too few drivers, too much CO2

In addition to company-specific factors, phenomena affecting the industry as a whole should also be considered when establishing international groupage lines. The ecological aspect is extremely important - the operator's approach to the environment is currently considered by many stakeholders, and sometimes it even decides about cooperation. Therefore, Raben organizes connections between countries in such a way as to reduce the value of the carbon footprint by shorter routes, fewer transloading operations, using high volume containers, combining with intermodal transport. A shortage of drivers is also a huge challenge, making it impossible for carriers to afford the milkrun distribution model, which is full truckload transport with multiple unloading locations. Consequently, Raben Group has adopted the policy of getting groupage shipments as close as possible to the final customer, where the distance counts and not borders. Simple connections from a single terminal in country A to a single terminal in country B have lost their business justification, hence the huge number of new and direct international connections that make cooperation with even the smallest depot located in particular countries a standard.

However, even in the most efficient international lines, one has to assume a margin for unforeseen events: economic sanctions, armed conflicts or a global lockdown caused by a pandemic. The experience of recent years shows that unlikely crisis scenarios can become very real. Such an example was the embargo imposed by Russia on European carriers in retaliation to similar actions by Brussels against operators from the aforementioned countries. Overnight, thriving trucking companies “woke up” to different market reality. The war in Ukraine has caused further trade disruptions and the closure of existing connections to the East.

Undeniably, COVID-19 has made the biggest difference in the logistics market. The pandemic has disrupted many supply chains established before 2020. New ones have been created in their place, and consequently the structure of shipments has changed. Due to the global coronavirus crisis and uncertainty about the continuity of supply chains from China and other far-flung destinations, a large reshuffling and return of production to Europe can be expected in the coming years, and Poland has a chance to be one of the major beneficiaries of this migration. So in the CEE area you have to be prepared for challenges not only in production, but also in the whole TFL industry.

Finally, it is worth emphasising that Raben Group fared well during the pandemic and was a great support to its customers. Much of the credit for this goes to modern IT solutions which allowed us to quickly adapt to the new reality and make deliveries despite the difficulties. The company's flexible approach and diversified customer portfolio also played a significant role. Thanks to the variety of goods in the groupage service, all existing lines could operate. The lack of dependence on any industry, such as automotive or mall deliveries, meant that the operator was able to deliver on an ongoing and uninterrupted basis, and the Picture Confirming Delivery (PCD) service using a photo and geolocation confirmation of delivery to the customer was pioneering in the market. This is one of the most important arguments to trust Raben Group and consider it an expert in international and domestic groupage transport. 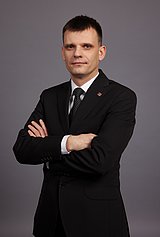