Czechia is an attractive market for Polish manufacturers - it ranks second in terms of exports from our country, second only to Germany. Poland's trade with its southern neighbour is steadily gaining in importance, which has already resulted in a 30% increase in the volume of shipments handled by Raben Group and almost doubling of the number of lines in this direction in just a year. Thus, Czechia has become an important player in the Raben network of international connections in Central and Eastern Europe.

Close proximity, many historical and economic ties, and finally, a genuine affection for the local culture, cuisine and the sense of humour - all of these factors bring Poland into a lively commercial relationship with Czechia. The times when the two countries (or at least parts of them) were one are long gone, but the ties remain. This translates into statistics: Czechia is the second export market for Poland, after Germany, with a 6.2% share (data for Q1 2022; up 0.4 percentage points from the same period in 2021). As for imports to our country, Czech ranks eighth, with a share of 3.1% (Q1 2022; down 0.3 percentage points from the same period in 2021)[1]. Here it is worth noting that the dynamics of Raben Group's operations between Poland and Czechia is many times higher: in 2021 the company transported 30% more shipments than a year earlier. One can only hope that trade between the countries will continue to flourish.

Trucks going back and forth

The top goods imported by Czechia from Poland (in terms of value) include machinery, transport equipment and devices, and various industrial goods, as well as chemicals and related products. Goods transported in the opposite direction are machinery, transport equipment and devices, and industrial goods classified mainly as raw materials and various industrial products[2]. Czechia is both an importer and exporter of automobiles, automobile parts and accessories, and electronics in the broadest sense[3]. Interestingly, automotive, chemicals and technology are among the main industries served by Raben Group.

The aforementioned increase in the volumes of shipments is a result of the number of connections between countries that Raben Group has on offer. Currently, 16 export and 10 import lines connect points such as Sosnowiec, Gliwice, Warsaw, Legnica and Wrocław on the Polish side, and Prague, Ostrava, Olomouc, Brno and Hradec Kralove on the Czech side. More are already in the pipeline, including from Poznań to Prague and from Wrocław to Brno.

With 26 daily connection, the Poland-Czechia trade lane has become number two in our internal hierarchy. We periodically analyse the flow of volumes in our network, respond to them and to the changing requirements of our customers. As a result, in the last year alone we have opened as many as 12 new connections with our southern neighbour, which has strengthened our position in the market - says Robert Wolny, CEE market development manager at Raben Group.

With potential and in the centre of events

It is worth noting that Czechia currently uses only a portion of its export potential, and Germany and Slovakia are among the country's most important trading partners besides Poland. In addition, Czechia is centrally located in the part of Europe covered by the Raben Group's latest project - the reorganization of its groupage lines initiated in 2021. The venture includes such markets as Bulgaria, Romania, Hungary, Slovakia, Poland, Lithuania, Latvia and Estonia, and precisely Czechia, which for the reasons mentioned above may have an important role to play.

Raben is rapidly expanding its network of connections between Czechia and Slovakia. Daily direct services from Prague and Brno to and from Kosice, as well as from Zilina to Ostrava, have recently been opened. The reorganization of the latter line made it possible to provide “next day delivery” service throughout Czechia from Zilina. Currently, shipments between Czechia and Slovakia are delivered in 24 hours through 14 connections between the largest centres in these countries, directly without additional transloading operations. Increasing activity is also being recorded in the southern direction, as evidenced by double-digit volume increases between Czechia and Romania as well as Czechia and Bulgaria. Here, the use of Romania's Timisoara as a transloading terminal is of great importance. 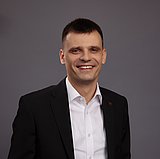 Raben and the Noble Gift travels 11,722 km together during the Weekend of Miracles